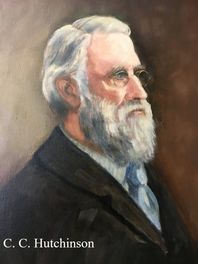 Pine Street Site and a Town Square.  Over the past Pine Street, the former post office property and the former Macon Bank property were used for a variety of public events, including the annual Christmas Tree Lighting and street dances.  Most of those events were shifted to other venues when the bank built on their site in 2006.

In May of 2005, the Town’s Planning Board finalized a new 5-year Land Use Plan for Highlands, which suggested to retain the look, feel, and fabric of a 19th century village.  One of the important features of such a village is a “village green,” or central park (square), which could provide recreational green space and serve as a venue for outdoor community events. Also, the town’s Land Use Plan named the old post office property as a tract that could possibly serve as a park. In 2006, Entegra Bank constructed the grass and stone amphitheater along Pine Street in anticipation of the future park. 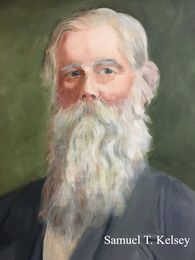 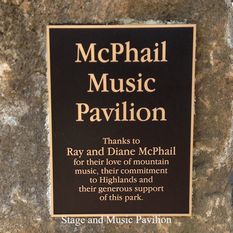 Park Development Timeline.  The sub-committee formed in 2006 to purchase the site also began the design for the park. This citizen committee eventually became an official subcommittee of the town’s Recreation Committee. Various designs for the park were developed by local landscape architect, Hank Ross of Highlands, who donated his time to the project. In winter of 2006, the gazebo located on the bank property was moved to the park to serve as a temporary pavilion. Then in 2009, the town installed a significant storm-water runoff project underground within the park property. This project, funded by Federal stimulus money, was designed to capture surface waters on the east side of town and improve water quality in nearby streams. The project was considered the best green project in the state’s stimulus program. During this period, a brick sidewalk across Pine Street was constructed to connect the park to Fourth Street and the amphitheater. Grass-pave parking spaces were added to create a better park environment. As part of the planning process, students in an art class at Highlands School suggested a historical theme, leading the community to change the name from Pine Street Park to Kelsey-Hutchinson Founders Park. While a conceptual design was finalized, funds were not available to implement the plan. 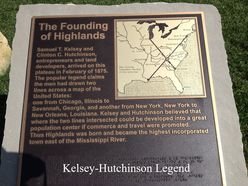 Park Completion. In the past before completion, the area continued to be used for various community events, including craft fairs, historic gatherings and live music. However, no facilities for day use by individuals and families existed. In the fall of 2013, town residents Nick Bazan, Skip Taylor and Hank Ross formed a new citizen committee for the purpose of completing the park. Subsequently, a coalition was formed consisting of several civic, garden, and environmental community organizations. The Founders Park Coalition remains today and is composed of representatives from the Rotary Club of Highlands, Mountaintop Rotary Club, Laurel Garden Club, Mountain Garden Club, Wild Azalea Club, Highlands Historical Society, Highlands-Cashiers Land Trust, Highlands Plateau Greenway, Highlands Biological Station, Highlands Chamber of Commerce and the Highlands Plateau Audubon Society. In December of 2013, Founders Park Coalition began an aggressive fundraising effort to complete the park. A final park design was approved by the town and a combined public/private partnership was formed. The coalition began working formally with town officials to develop the final construction plans prepared by the design firm, Ross Landscape Architecture, PLLC. Park construction for phase one began October 2014 on the former post office property. Phase two construction began on an adjacent property in August of 2015 to expand for additional space and facilities. All construction was complete in April of 2017. The park facilities include a stage pavilion, amphitheater, public restrooms, courtyard plaza, tables and chairs, concession building, ice skating rink, benches, picnic amenities, water feature, splash pad, historic monuments, street pavers, little free library, Wi-Fi, chess tables, shade trees, plantings and open grass areas. Today, the 1.4 acre Kelsey-Hutchinson Founders Park is the town center and is the ‘go to place’ for day use recreation and public events in Highlands. 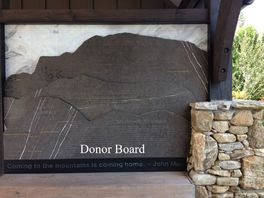 ​
​Contributions from the Community. Over the life of the project, funds were raised from various individuals and organizations (both public and private), including major donations from the Highlands-Cashiers Land Trust, Rotary Club of Highlands, Mountaintop Rotary Club, the Town of Highlands, Macon County and some key individuals. Contributions from organizations and individuals are represented on the donor board located at the corner of Pine Street and Fifth Street. Today, Friends of Founders Park continues to provide funds for park protection and maintenance. Donations are still accepted and used to beautify our popular downtown park.